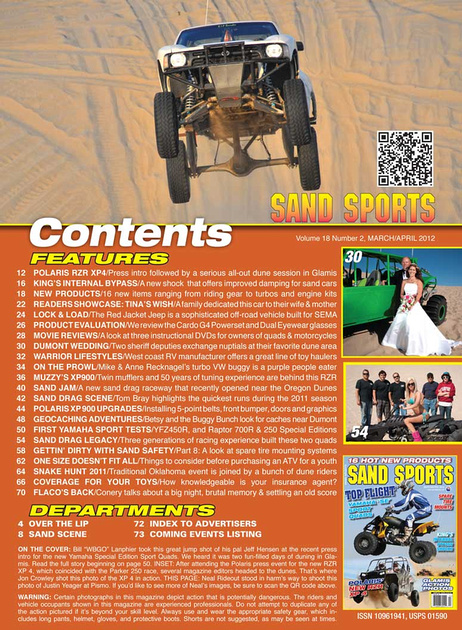 I’m going to pat myself on the back for a moment. It’s still hard to believe that the only wedding I have ever done as a photographer has made it into the pages of a national magazine, Sand Sports. When I originally started this project, the groom had invited the editor of Sand Sports, Mike, to the wedding. He had forwarded me the email knowing that I was working this wedding (I do freelance work for Sand Sports). Since it was to be held in the dunes, I proposed an article on it. At first he wasn’t too keen on the idea. Seems he gets many requests yearly for magazine coverage of weddings and since this is a “gear head” mag, the subject is not really suited to the audience. He explained to me his criteria on these things and admitted they have covered weddings sporadically in the past but not necessarily as a dedicated feature. Then he left a small window open for me. Basically, I had to present photos and an article that would make him want to run the story. Ahh, a challenge! I knew the photos were good. Got plenty of action shots of the bride, white dress and all in a sandrail. The hard part was the article. I knew it would have to relate to the duning audience. So I sat down and decided to attack this from a pure gear head perspective. Basically, insert myself as the struggling motorsport photographer that has been transported to a wedding chapel. Which in a way, is the truth. I told the story in that perspective. Making it humorous as I went to keep the audience interested. Describing the wedding as well as their Sandrail in the article kept the gear head aspect alive. I think the hook to it all was describing the brides preparation, dress, and the cake as if they were assembled at a race shop. To me, that was the touch it needed. Lucky for me, the Bride and Groom loved the idea. And best of all, so did the editor. It is in the March/April 2012 issue. BTW, the photo below was not photoshopped, it was a mirror and I positioned the couple for it. I get asked about it a lot. 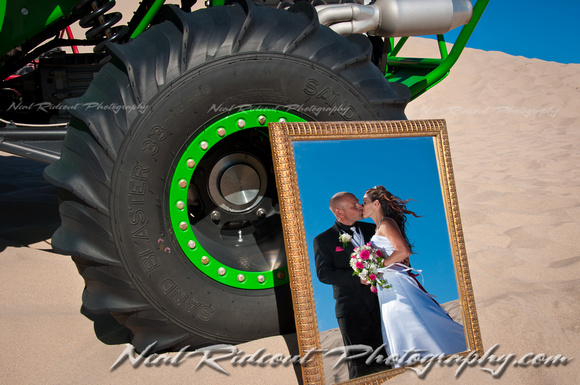